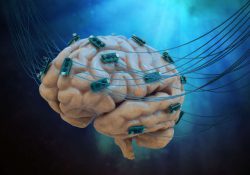 “What does it mean to have a million- fold advance in intelligence or a million-fold increase in cognitive memory? …The future of social  media connectedness will be our cerebral cortex connected to the cloud. That future is less than five years away.” – Peter Diamandis, creator of the XPRISE award for scientific advances

A recent announcement of a successful connection of the minds of three people over the internet (https://www.newscientist.com/article/2181910-three-people-had-their-brains-wired-together-so-they-could-play-tetris/  ) – to play a joint game of Tetris was of unique interest to me because I have written about these advances in our TRANS-human “directed evolution” for years. (visit http://jesusfreakcomputergeek.com and select TRANSHUMANISM )  Here we have three human minds “wired together” over a large distance via the Internet and using AI to perform translation duties. Although there are a number of detractors who minimize the “AI threat” to humankind; Ken Ham from “Answers in Genesis” – for example – writes that “AI is not a threat to mankind” He says this because he believes that scripture makes no mention of such a threat. Another example of “Christian thought” on AI and transhumanism comes from Reverend Christopher Benek – Associate Pastor at First Presbyterian in Fort Lauderdale, Florida. Pastor Benek promotes the idea (as do other highly respected church leaders) that transhumanism may be the method thru which mankind achieves eternal life. http://www.christopherbenek.com/about/

While they may be quite adept in their given fields, both of these examples exemplify a lack of understanding in the areas of technology:

…and a host of other related technologies that, when given an unbiased examination –  reveal the true “end-game” application of AI and how it will negatively impact our “personal space” – even down to the few square centimeters inside our heads.

It should also be pointed out that these men (and others) also reject doctrinal truths that were adhered to the early church and by Jesus Himself and are mentioned through-out scripture as a whole.   We could almost say – they do not know or believe – history.

Understanding the very real and pervasive threat to our known way of life is dependent on understanding history.  Yet, much of such an historical record that has been left out of most of the public’s knowing – whether a person is formerly educated or not. As it is written, “There’s nothing new under the sun…” – those who forget history are doomed to repeat it – also comes to mind.  Only this time around, a repeat of history will be worse:  much worse.  How do I know? Because Jesus Christ of Nazareth said it would be so. In Matthew 24 Jesus states that “it will be the greatest tribulation ever” (paraphrasing) He also stated that He would return when it is “as it was in the days of Noah…”  Most have very little thought to what that actually means.  He goes on to say “they will be eating and drinking and taking in marriage…”  Once again, this has been misunderstood because no one remembers what Jesus was actually referring to. We have forgotten history.

Then there’s the idea of end-times eschatology concerning a figure mentioned often in Biblical, end-times apocalyptic teachings: the antichrist. It is written that “he will stand in the temple, declaring that he is God.” (Paraphrasing)

Such a statement has many watching and waiting for the third temple to be built on the temple-mount in Jerusalem. A third temple may be built. But focusing on such an event has kept many of us from watching for the “actual antichrist temple event”.  It is written “do you not know that your bodies are the temple of the Holy Spirit?” (Corinthians 6) It is also written that “God does not live in temples made by human hands.” (Acts 17) So exactly what temple of God should we be looking for –and therefore – keeping watch over?

In Genesis 6 – the days of Noah – we are told that “all flesh was corrupt and their minds were continuously evil.” That is another important understanding leading up to Jesus’ return. (Genesis 6)

According to scripture, salvation relies on the “indwelling of Holy Spirit” who comes to reside within a person when one accepts Jesus christ as Lord and savior. The same power that rose Jesus from the grave that will raise those in christ Jesus – up to eternal life at the sounding of the last trump.  Suffice it to say that satan’s most likely strategy to prevent Holy Spirit to be “in a person” is to corrupt mankind in a way that makes it impossible for God’s Holy Spirit “to reside in man”.

This is why we should endeavor to understand 1- Artificial Intelligence, 2- transhumanism and 3 – “directed evolution” – which is the application of the first two technologies mentioned.

I have heard a good many lament the problems of social media and how every person is constantly staring at their devices. The next “hot social media movement” is going to be the most intimately social app imaginable:                Inter-connected mind via the cloud on the Internet. Also called “a hive mind” – it is akin to a corrupted version of Holy Spirit – where everyone has the “same thoughts” through a vaporous ether(net)– their minds will all be in one accord, as if to mock what is written in Acts 2.

People will be able to think and have their thoughts beamed into other’s minds – even if there are native language barriers, AI will translate in real-time.

Facebook has been developing a technology to allow you to post text comments using your mind for years.  Regina Dugan, who headed a DARPA research arm for AI and robotics – took over a post at Facebook called “Building 8” (https://futurism.com/inside-building-8-facebooks-secret-innovation-weapon ) – to develop a technology that would have your mind permanently connected to the internet. No worries about privacy – you would only share what you want to share, while keeping all of your private thoughts, secret. Yep! And I have a bridge in New Jersey I want to sell you. (Miss Dugan has since left the post at Facebook- to take on other endeavors)

There is actually UN efforts to create international agreements concerning Cognitive Liberties. The world’s governments are working diligently to legislate how much of your mind is off-limits to prying government authorities.   https://blogs.scientificamerican.com/observations/do-we-have-a-right-to-mental-privacy-and-cognitive-liberty/

I am not writing these things to scare you all. It is my belief that most of us would want to know ahead of time – a coming storm.  These things are not soon coming – they are here. I recently heard a definition of “AI” – Artificial Intelligence. The definition of AI is “a program that writes itself” – and it was explained that such a technology has been in operation for a decade now.  It is because the AI program writes (or creates) itself that no one actually knows how it works, nor do they know what it will do or not do. And now we are arriving at a time that people are endeavoring to permanently connect their minds to such a thing.

Their minds may all be “in one accord” – but my concern is that they are sure to also be continuously evil.

I’d love to hear from you!  Email me at –  jesusfreakcomputergeek@gmail.com

Here’s a “smattering” of related URLs that may add to your understanding of the subjects mentioned in this article:

When Will We Have Artificial Intelligence as Smart as a Human?