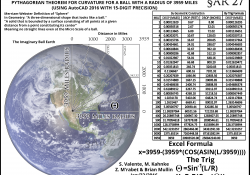 “… yeah, good luck with that.” (The statement that I usually here whenever I tell someone “the earth is flat and immovable”)

I am many times “perturbed” when a member of a closed group challenges the ideals of the group they have joined. One such group or type of group is a Facebook group called “Official Flat-Earth and Globe Discussion” – there are others, such as “Biblical Cosmology” groups, Mandela Effect groups and such. The questions have always intrigued me – in that they are the same questions and “attack/insults” that those of us in these groups have already heard and rebutted for years! But the one questioning or attacking what we have come to know – believes themselves to have “trumped” our thinking and will most certainly turn us all around from our blaspheme of the religion of Scientism. Here’s one such example – that lists the usual statements against the idea of a flat, enclosed and IMMOVABLE world – which is the reality of which we live.

Read the page for yourself and test to see if you can find the multitude of flaws in their mind-controlled thinking: “7 Ways to prove the earth is round”