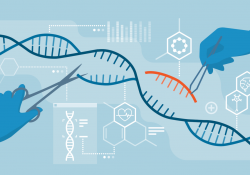 “If you can hack the rules of mRNA, “essentially the entire kingdom of life is available for you to play with”

The recent news release about Moderna Pharmceutical’s experimental coronavirus vaccine states: “Moderna Inc. said its experimental coronavirus vaccine was 94.5% effective at protecting people from Covid-19 in an early look at pivotal study results, the second vaccine to hit a key milestone in U.S. testing.”  The Wall Street Journal piece can be read in its entirety at:  https://tinyurl.com/y5nyu4cd  —

You can also read and see CNN regurgitate the same story:   https://tinyurl.com/yya36k6a  – Even our main-stream-Media sources seem to understand the Biblical concept of “on the testimony of two or more, so shall a thing be established…” – Naturally, you will find the same story, with the same level of detail, at all of the “well-established sources”.

“Pfizer’s and Moderna’s vaccines have similar results because they use the same technique to activate the body’s immune system.   The vaccines deliver messenger RNA, or mRNA, which is a genetic recipe for making the spikes that sit atop the coronavirus. Once injected, the body’s immune system makes antibodies to the spikes. If a vaccinated person is later exposed to the coronavirus, those antibodies should stand at the ready to attack the virus.”

No vaccine currently on the market uses mRNA. And we continue from WSJ’s piece:

“There has always been skepticism about mRNA — it’s brand new and would it work?” Fauci said. “What we saw in the trials is there was no real safety concern, and the efficacy is quite impressive. We saw nearly identical results [with Pfizer and Moderna] and it almost really validates the mRNA platform.”

mRNA inserts itself into the host’s genetic sequence

Research on mRNA began many years before the current pandemic. Fauci’s agency, the National Institute of Allergy and Infectious Diseases, has collaborated with Moderna on the development of its vaccine.    Both vaccines are given in two doses several weeks apart.

Both vaccines require extremely cold storage environments – but Moderna  bests Pfeizer because it can be stored in a common refrigerator for 30 days, where-as Pfeizer’s vaccine only survives in a common fridge for 5 days.

That is the gamut of the functional and technical details presented in these stories. There are many details, to me, that beg more questions…

Has anyone asked the question, “How does an mRNA vaccine survive the protective/cleansing mechanisms of our blood, travel to our cellular walls and then INSERT ITSELF into the genetic code hidden inside our cells?”  Are you at all interested in the rest of the story?

There is a theory is that the CV-19 vaccine will have a microchip in it – and the injected microchip will be used to monitor all of us. This is in actuality, not accurate and according to Bill and Melinda Gates, nothing could be further from the truth. In a published piece by “The New Humanitarian” – “The non-profit, ID2020, which does not work on embedded microchips, is falsely accused of being part of fictitious plans that allege Bill Gates supports mandatory vaccination and the implantation of microchips or “quantum dot tattoos” into patients.”  – The entire piece can be found at:  https://tinyurl.com/rd6ap67

If you have never heard of ID2020, The Digital ID Alliance – it is an international, UN lead effort to create a digital ID that is secure and accepted by every nation. Their website is ID2020.org —

As stated at the beginning of this writing – two companies are at the forefront of the efforts of “Operation Warp-Speed” – Pfister and a company called MODERNA. Moderna is the manufacturer of the vaccine of choice by Bill and Melinda Gates, who helped fund MODERNA’s potential flagship CV-19 vaccine. The vaccine’s RNA based mechanism, called – “messenger RNA” is defined by GENOME.GOV: RNA is defined as a molecule essential in various biological roles in coding, decoding, regulation and expression of genes. RNA and DNA are nucleic acids. Along with lipids, proteins, and carbohydrates, nucleic acids constitute one of the four major macromolecules essential for all known forms of life.

Here are a few sources that provide the other technological details of the world’s most HIGH TECH vaccine ever seen. Bloomberg recently published:  Moderna Wants to Transform the Body Into a Vaccine-Making Machine – (https://tinyurl.com/y48z4cus )

The vaccine technology that is being presented is an impressive change from what is normally implemented as a response to viral infection. MODERNA’s approach is a far cry from the usual “dead or weakened virus” that is injected into our bodies – that causes our bodies immune defense systems to manufacture antibodies to said, invading viral agent when a real pathogenic threat occurs. This new approach will use a number of technologies that will help to monitor our bodies for CV-19, alert our own immune systems and cause our us to manufacture antibodies to battle the invading agents and any possible future invading bacteria or virus.  The main component is a type of DNA called “mRNA” or “messenger RNA” – this mRNA is “genetic information” – not the usual “part of a virus” scenario.

This information basically tricks our body into reacting the same way it would if the virus were entering the body.  From a column published in FORBES magazine July 29th, 2020:

“For a decade, Moderna has been working to develop mRNA technology that could turn the body’s cells into drug factories. In order for the approach to work, Moderna needs to safely deliver the mRNA to the body’s cells without the payload breaking down in the bloodstream. As a result, any mRNA vaccine or therapeutic consists of two components, the actual sequence mRNA and the delivery mechanism.”

MODERNA has led the effort to create the mRNA vaccine and will use the required additional component for delivery, that has been in use on non-human subjects for over 12 years.

In a paper cited from National Institute of Health (NIH) “Nanorobot Hardware Architecture for Medical Defense” (https://tinyurl.com/y2t4aofk ) NanoBots are an additional component of the vaccine technology, and will provide “real-time in vivo prognosis of biohazard infection(s)… it should provide high precision pervasive biomedical monitoring with real-time data transmission.”  What this means in “regular folk-speak” is – “The extra-tiny (nanotech) robotic devices used to carry the genetic antivirus technology will monitor from within your body (in your blood-stream) and watch for any kind of biohazard – with high accuracy – 24/7 and transmit information about what is monitored in real-time (likely transmitted through our cell-phones) to computing systems that in return – send commands to the nanotech to edit the genetic antivirus technology (mRNA) to be ready for any new potential biohazard. An additional feature component of this new approach is that the mRNA can be modified “on the fly” – any time there is another known biological threat in the world.

Many have asked the question of “How will we ensure that everyone has gotten the vaccine?”

Bill Gates has been speaking frequently about a technology funded through his Bill and Melinda Gates Foundation: QUANTUM DOTS.

From Scientific American: Invisible Ink Could Reveal whether Kids Have Been Vaccinated –      ( https://tinyurl.com/wjkxfn9  )

Quantum Dots (not to be confused with “Dippin Dots”) are a series of tiny microneedles in a patch that is placed on the hand. These microneedles deliver medication less painfully (sounds good to me) and more safely than hypodermic needles.  The microneedles use “snake-fang” like, structured needles to inject the mRNA nanotech and an additional component used to “prove” you have received the vaccine. It is a photoreactive polymer (something that shines when you shine a special infrared light on it) The technology reflects a subject’s entire medical/vaccination history via infrared light, out through our skin tissue.  The technology is called LUCIFERASE.  You can find out more about LUCIFERASE at the FDA.gov website:    https://tinyurl.com/y2k3lvzh

Hacking the kingdom of life

The vision of an mRNA drug has beguiled scientists for decades. “It’s a huge idea,” says Michael Heartlein, who heads mRNA research at a competing biotech called RaNA Therapeutics just a few blocks away. “Any protein target [where] you can think of a potential therapeutic, you can approach that with mRNA.” The single-stranded molecule sets up a temporary protein factory outside a cell’s nucleus and attaches to ribosomes. This cellular machinery translates its sequence of four kinds of nucleosides—adenosine, cytidine, uridine, and guanosine—into a protein. Then it degrades within a day.

Assembling these chemical instructions could be a faster and more adaptable way to make drugs than manufacturing the individual proteins themselves in large bioreactors. And it would allow scientists to deliver proteins that act inside cells or span their membranes, which are a challenge to introduce from the outside. An mRNA drug would also be easier to control than traditional gene therapy. Like mRNA, gene therapy can induce cells to make therapeutic proteins, but it typically introduces DNA that can integrate unpredictably into the genome.

If you can hack the rules of mRNA, “essentially the entire kingdom of life is available for you to play with,” says Hoge, a physician by training who left a position as a health care analyst to become Moderna’s president in 2012. Adjusting mRNA translation to fight disease “isn’t actually super high-risk biology,” he adds. “It’s what your genes would do if they were rational actors.”

One key problem, however, is that our bodies would normally destroy incoming mRNA before it could get cranking. It’s a relatively large molecule that is prone to degradation, and as far as our cells are concerned, it’s supposed to come from the nucleus, where it’s transcribed from DNA. RNA invading from outside the cell is the hallmark of a virus, and our immune system has evolved ways to recognize and destroy it.

Here is the Science post in its entirety: https://tinyurl.com/ugntj63

Judging by the impressive new vaccine technologies that are going to be used to ensure our protection from CV-19 and any future biological threats and for our personal identification – we can rest assured that our lives will never return to what they once were. We will soon live in a world where everyone is protected by a series of genetic modifications that pre-emptively strike against any potential virus, sickness or medical issue that comes our way. We will also be able to prove to those around us that we have been vaccinated – and that everyone is safe. The new normal will assuredly not be “normal” at all. But like Lot’s wife, there is no looking back. The entire world’s population is being moved from utter chaos to a new order.  All of this “mRNA edit your DNA” tech talk – might seem like a bunch of crazy talk.  I’m just telling y’all what the science and pharmaceutical companies are saying. So please – don’t kill the messenger.