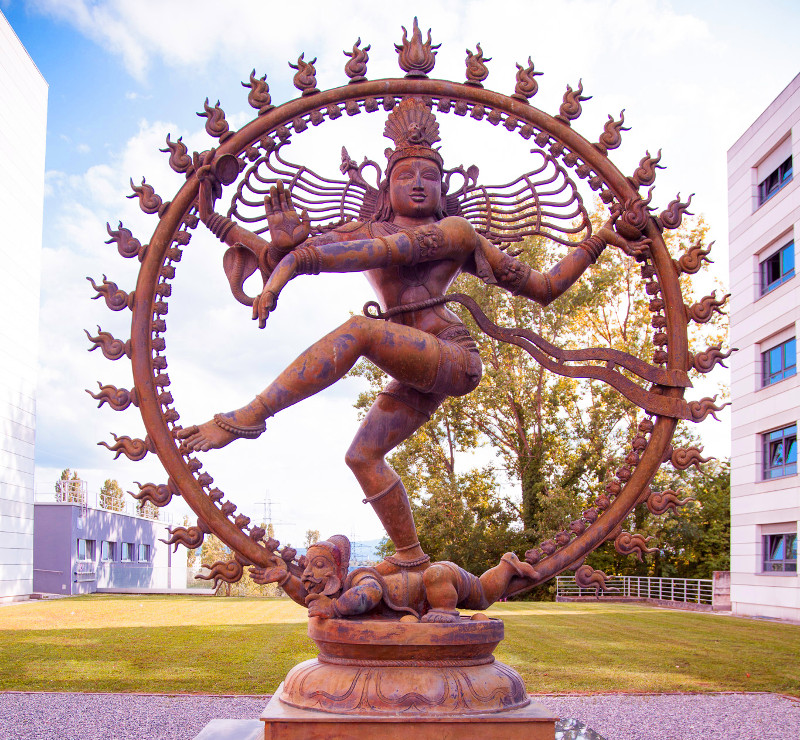 “Out of this door might come something, or we might send something through it – Indeed, there would be an open door, but that even with the power of the LHC at his disposal he would only be able to hold it open “a very tiny lapse of time, 10-26 seconds, [but] during that infinitesimal amount of time we would be able to peer into this open door, either by getting something out of it or sending something into it.”

Sergio Bertolucci, Director for Research and Scientific Computing at CERN

“The God particle has the potential to become unstable and destroy the universe. This could mean that the universe could undergo catastrophic vacuum decay, with a bubble of the true vacuum expanding at the speed of light. This could happen at any time and we wouldn’t see it coming.” –

“What the majority of the world deems as entertainment is nothing more than Luciferian rituals and propaganda laced with esoteric symbolism and messages intended to fulfil the antichrist agenda and to subliminally condition the masses to accept what is coming.” – excerpt from “CERN the Opening of the Abyss?” by YouTube SEVENTHVIAL213

Much has happened since those infamous days of opening CERN/LHC dimensional portals.  This post is to make sure that people understand what transpired to lead us up to a time when REALITY IS NOW LITERALLY –  MALLEABLE AND CHANGING.

Just about every sci-fi movie, cartoons, many commercials and even “Dancing with the Stars” portray inter-dimensional portals that all bear a striking resemblance to CERN, the particle accelerator in Switzerland. The Avengers, the Disney cartoon “Gravity Falls” – and yes – that very popular program, Dancing With the Stars, have been conditioning, familiarizing us all to the reality of CERN.

On “Dancing” there was a piece titled “I Am Woman”. It shows the women being “transformed” into beings of light, shooting in and out-of a portal and the women are also “enhanced” by technological, circuit like etchings. If you haven’t seen it check it out here:

If you have never heard of CERN and/or the “god particle”, you need to.  We should be concerned about the “pulling in” and accumulation of pounds of anti-matter, which has been connected to paranormal activity and also damages the human psyche – causing people who are near the anti-matter to go insane. We should be concerned about a world-wide effort to create “inter-dimensional gateways” and what amounts to a repeat of the (re)construction of the TOWER OF BABEL – shouldn’t we? Read on and I will explain.

According to the CERN website:  “At CERN, the European Organization for Nuclear Research, physicists and engineers are probing the fundamental structure of the universe.

They use the world’s largest and most complex scientific instruments to study the basic constituents of matter – the fundamental particles. The particles are made to collide together at close to the speed of light.  The instruments used at CERN are purpose-built particle accelerators and detectors. Detectors observe and record the results of these collisions. Founded in 1954, the CERN laboratory sits astride the Franco-Swiss border near Geneva. It was one of Europe’s first joint ventures and now has 21 member states.”  Read more at:  http://home.web.cern.ch/about

You probably didn’t know this, but the Internet/ World-Wide-Web was created at CERN in 1989 by Tim Berners-Lee.  The most recent Nobel winning discovery was the “God Particle” – you may have heard of this?  The HIGGS BOSON. This so-called god-particle was discovered in 2014 and made quite a stir in the theoretical physics community.

Some of the not-so-publicized science that CERN experiments have brought to light is our understanding that we have parallel universes that can connect with each other through dimensional portals which are sometimes called “wormholes”.  One wormhole theory that has been proven by CERN is the “Einstein/Rosen Bridge” – which is a wormhole, opening or gateway into a parallel universe. Here is a sampling of alarming statements from CERN scientists and engineers:  “We’re hoping to see supersymmetry and extra dimensions.”   Dr. Mike Lamont – control-room engineer/technician at the LHC.

“Out of this door might come something, or we might send something through it” – Sergio Bertolucci who is Director for Research and Scientific Computing at CERN. Dr. Bertolucci also added,   “Indeed, there would be an “open door”, but that even with the power of the LHC at his disposal he would only be able to hold it open “a very tiny lapse of time, 10-26 seconds, [but] during that infinitesimal amount of time we would be able to peer into this open door, either by getting something out of it or sending something into it.”

This is not a late April fools prank or a plot outline for a new science-fiction movie. This is REAL SCIENCE.

Maybe it’s just me – but “getting something out of” another dimension doesn’t sound like a good idea. The last time I checked God’s Word – the only “extra-dimensions” that exist are what the Bible calls “heavenly realms”.  And according to Jude and 2nd Peter, the “angels that left their first estate are held in chains of darkness…” the Bible also indicates that on the day those angelic and demonic beings are released, “Men’s hearts will fail them for fear of what’s coming upon the earth.”  I don’t know – call me an uneducated Bible-thumper, but opening dimensional gateways doesn’t sound like a good idea.  Mankind doesn’t seem to learn from past mistakes. It’s been done before and things have never gone well for us. “Done before?” You might ask.   Yes.  What has been will be – there truly is nothing new under the sun.

Ancient Sumerian records and Biblical records talk about the gods coming into our universe, appearing in the air,  out of “no-where”.  And in extra-Biblical texts (Apocryphal books of Enoch and Jasher) the infamous Nimrod lead the construction of the tower of Babel, which was described as being topped by a portal or gateway into God’s realm.  (The Bible itself calls it a “tower into the heavens”) The very word used to name the tower – “Bab El” – means “gateway to God” in the ancient languages.

So what does religion have to do with science? It seems that the world’s greatest scientists at CERN are quite religious – as long as the religion doesn’t include Jesus Christ of Nazareth. Hinduism seems to be preferred. The three biggest Hindu gods are Brahma, Vishnu and Shiva. Brahma is known as the “creator god”, Vishnu is the god who keeps things constant and Shiva is “The Destroyer”. It should be understood that Shiva, in Hindu beliefs – does a dance of destruction – but not just for the sake of destruction.  He destroys so that Brahma, the creator god, can recreate the earth and recreate reality.

“So what’s this all got to do with a high tech facility like CERN?” you might ask. What you really should ask is why there is a huge statue of

SHIVA outside the main entrance of CERN?

CERN also produced a video of a ritual dance of destruction titled “Symmetry”.  This video includes scenes of CERN technology inter-mingled with a “satanic priest” walking a circle around a dancer, “beings” coming through the CERN tunnel and other disturbing imagery. I would encourage you to do your own research.  I will post many links to more information on my YouTube site.

Visit www.youtube.com/user/jesusfreakcg  and find the “We Should Be concerned” playlist to view many of the videos and other information.  There is also a video of Pastor    teaching – in laymen’s terms – why we should be concerned about CERN.