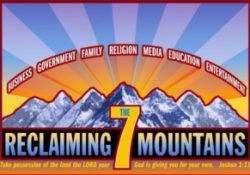 “But small is the gate and narrow is the way, which leads unto life, and few there be that find it.” Matthew 7:14 (KJV)

There are a number of well-known, highly regarded churches and Christian leaders who are teaching a modern understanding of Jesus’ teachings – “another Gospel” you might call it. You wouldn’t notice at first glance anything amiss. The language they use smacks of standard Christian ideals.  But when you dig deeper into the actual beliefs and practices, you will find that these churches and leaders are not followers of the Jesus of the Bible – at all. Go to www.youtube.com/jesusfreakcg to find out who some of these churches are.

In the Bible it is written, “Narrow is the way, which leads unto life, and few there be that find it.”

That statement is in some ways frightening to me – because we humans are full of error, which is by definition – sin.  A Christian on that narrow path can stray to the right or to the left: on either side is a pitfall if we fail to emphasize truth and love simultaneously.   Love without truth – is a liar. And truth without love – is a killer. This is why we must speak the truth in love. (Ephesians 4:15) Jesus emphasized what our focus in life should be – when He stated that the two most important points in the law were: Love the LORD God with all your heart, mind and strength – and the second is to love your neighbor as yourself…”  These two statements are taught by Jesus as being very “close” to each other in import – but we should be mindful of an important fact. GOD COMES FIRST.

The emphasis within the “emergent church” – is the second commandment:  loving your neighbor as yourself. That focus – usually presented in the form of “love and tolerance” takes precedence before loving (and therefore obeying) God and the resultant outcome produced is “secular humanism”. It feels good, sounds good and looks good – but it comes at the expense of losing the truth.  It brings to mind the scripture: “There is a way that seems right to a man – but is the way of death.”

The “emergent church” stresses that all religions point to God. You cannot have religions that deny the cross – and deny the deity of Jesus Christ of Nazareth and then equate said religions as being “equal” to Christianity. Those religions are contrary to true Christianity. The Bible is clear: “Whosoever denies the Son, the same hath not the Father: but he that acknowledges the Son has the Father also.” (1 John 2:23) And all eastern religions outside of Judaism and Christianity (TRUE Christianity) – when you study such religions – they culminate to the point that they teach you that “you are god”.

God is In Everything?

An area for potential pitfall – is for church congregations who have never focused much on “spiritual things” and have for decades denied that speaking in tongues, healing or any experience that involves supernatural, spirit movements – would say that is no longer a part of what God does. “That was ended with the Apostles” – they might say.  It is relatively easy and likely – that when said church congregation begins to dabble in and experience spiritual things, that they become misled and “tricked” into believing that the spiritual manifestations that they experience are actually of God, when they are in fact of demonic origin. “False Fire” as it were. They do not understand to “test the spirit”. Then along comes the false teachings of the “emergent church”. Since these churches are so large, prominent, growing and seemingly successful, they are viewed by many as ones to emulate. But their so-called success doesn’t make their teachings correct.  Just because something spiritual makes you feel good, gets you all excited and tingly – and maybe even sounds good – (like a prophecy spoken over you that makes you feel all puffed up) doesn’t make it good. Even Satan can appear as an angel of light. One of the most unusual (I say that to be nice) spiritual aspects of the “emergent church” movement is a thing called “tokin the ghost” – where people get high on Jesus and/or god’s spirit. I’m not making this stuff up – they “pull out” an imaginary joint and start smoking some Holy Spirit. You have to see the videos:

– watch it in its entirety – but the tokin starts at around 14:30 into the video.

Many of us have heard the term “pantheism” which means multiple gods and ascribes god as being the universe.  Pan-Antheism – simply put – means that god is in everything. According to “emergent church” beliefs, all matter is “spiritually evolving”.  The god that is in everything is coming out of everything – as it were. This is what is “emerging” – in the emergent church. We, and all matter, has god within. And since god (I am purposely using lowercase) – is in everything and he is emerging out – then the future, even the immediate future – is bright. Never mind that there are numerous sources of scripture that states otherwise. The life of a true believer is decidedly marred in this world with tribulation:

“Rejoice in hope, be patient in tribulation, be constant in prayer” (Romans 12:12)

“I have said these things to you, that in me you may have peace. In the world you will have tribulation. But take heart; I have overcome the world.” (John 16:33)

“Many are the afflictions of the righteous, but the LORD delivers him out of them all.” (Psalms 34:19)

But the real clincher for me that tells me how wrong all those who preach/teach that Christians are destined for a world-wide unity in power and glory and those who preach “prosperity gospels” – which isn’t the gospel at all – is the scripture I used to open this narrative: “…narrow is the way which leads to life…” – the word for narrow in the original Greek is “thlibo” – which means “trouble, affliction, distress”.

Although we should not grow weary in doing good – the Bible indicates that we will not change the world. In fact, it states that if God didn’t shorten the days (because things will be so bad) that all flesh would be destroyed. The false teachings that state that “the church” will cover the whole earth in glory and power prior to Jesus’ return are just a cover for the fact that there will be a church that will all unite and cover the whole earth. But it will not be God’s church. And if you want truth – you do not want to be a part of the “not God’s church” group. (Follow me?) The only time the world in which we live in will be truly changed – is when Jesus of Nazareth returns. (Paraphrasing) He and a multitude of heavenly hosts will “crack the sky” and all will see Him, when the last trump sounds! It is written that at that moment “the kingdoms of this world are now the kingdoms of our LORD”. That – folks – will be the day the world is truly changed!

“So why does this even matter – Dave?” you might ask. If you have a ministry – particularly one that focuses on youth (the next generation) these churches and leaders focus on youth. They are very appealing to our youth. We need to be aware of what is happening so that we can steer the next generation away from such falsehoods. Their eternity truly depends on it. It’s not enough that we are simply in church – we must shield ourselves in truth and live much according to Romans 12:1-3 and renew our minds away from the way the world thinks.

This column has quotes and many references to a video written and produced by Elliot Nesch. Visit his YouTube site at:  www.youtube.com/user/elliotnesch

“End of the Age: The Truth about the Rapture” – Passion for Truth Ministries www.youtube.com/user/passionfortruthvideo

So much has transpired since this column was originally published – in 2014. There are now “covert operations” to inject new-age spirituality and an “ayahuasca influenced spirituality” into the believing body of Christ. That hallucinogen has produced a liturgy of false doctrinal ideals like:

Christ consciousness, God in all, All-in-All, “As Above – so below”, You are God” and many more. The worst of these false-doctrinal ideals are “The Seven mountains” doctrines and the idea that TRANSHUMANISM is part of God’s plan to provide eternal life.

ACTS 8:9-11 9 But there was a certain man, called Simon, which beforetime in the same city used sorcery, and bewitched the people of Samaria, giving out that himself was some great one: 10 To whom they all gave heed, from the least to the greatest, saying, This man is the great power of God. 11 And to him they had regard, because that of long time he had bewitched them with sorceries.