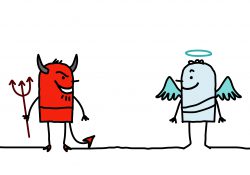 or at least make or break our day.

When it snows it can be difficult to see where curbs are but when somebody made the first mistake here others followed and – well, you can see the result.

I saw a truck almost make the same mistake when we saw this. There’s something that can be learned by this. People are fallible. We all make mistakes but when we see that someone else did something we tend to give it credibility without researching it.

I’ve made the mistake of passing around a fake meme occasionally and when I discover it’s fake (not because of FB fact checkers) it reminds me that I need to be diligent in researching everything. I know it’s annoying and time consuming but it helps everyone. All it took was one person to make a mistake which left tracks in the snow here and about 50 other cars followed the tracks making the same mistake. According to a gas station attendant next to it one car even needed to be towed out. Let’s all try a little harder to avoid fake memes and make sure lies aren’t misleading ourselves and others.

We all make mistakes but when we see that someone else did something we tend to give it credibility without researching it.